Doctors will do anything to keep some patients alive, but they take a different approach when it comes to their own lives — knowing the limits of modern medicine, most would prefer to die peacefully.

RadioLab recently discussed the paradox in a podcast called "The Bitter End." They refer to a 2003 report, published in the Journal of the American Geriatrics Society, that asked older physicians about their preferences related to treatment at the end of life. The study was led by Joseph Gallo, currently at Johns Hopkins University.

"Physicians have a clearer understanding of the health states others may only imagine," the study authors wrote, "and may have considered what they would want for themselves in such circumstances."

The chart below, republished from the report, makes it clear that most doctors would prefer to die without medical intervention (indicated by the black bar). 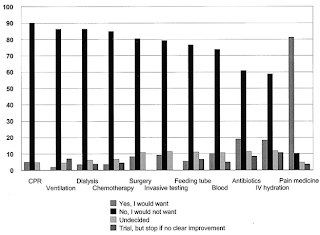 Journal of the American Geriatrics Society

Ken Murray, a professor at USC Medical School, wrote about the subject in a 2011 op-ed originally published at Zócalo Public Square.

When faced with a terminal illness or old age, medical professionals know what matters most. The may choose to die comfortably at home instead of resorting to aggressive life-prolonging treatment, such as chemotherapy, radiation, CPR, or surgery.

"There will be no heroics," Murray writes about his own end-of-life medical care, "and I will go gentle into that good night."

http://www.businessinsider.com/doctors-choose-a-different-way-to-die-than-the-rest-of-us-2012-2?
Posted by Gary at 5:11 PM

Whenever I feel like taking a trip back in time, I save myself the trouble of building a time machine and instead just head over to a doctor's office. For a Millennial, or really anyone who lives a modern lifestyle, getting medical care is a rare departure from an otherwise technology-fueled existence.

First comes making the appointment, which usually requires a phone call. My gynecologist's office, for example, doesn't use online booking, so scheduling a visit means calling them from my "open plan" office and describing what, if any, "the issue is." Layered on top of this indignity, my last name is basically impossible to spell or pronounce. "Yes, once again that's K-H-A-Z-as-in-zebra-A-N."

Filling out forms in triplicate in the waiting room is, for me, relatively painless. By now, I've perfected my ability write my address, insurance ID number, and the words "allergies to most plants and animals" in about 15 seconds or less.

No, the biggest nuisances occur when there's any sort of communication required with or among doctors outside of the appointment. In the past 10 years, I've moved from Texas to Washington to California and back to Washington, but each time, I dragged along a filing cabinet packed with phlebotomy results and shot records. To this day, the trunk of my car contains a sinus x-ray the size of a Renaissance painting because it doesn't exist electronically and it's really expensive to get re-done.

I was ten minutes late to an appointment the other day, and the doctor poked his head out the door to let me know I'd have to reschedule.Few of my doctors use email to communicate with patients, so medication refills, questions about side-effects, or reminders about appointments all require elaborate phone tag. This hassle is exacerbated by the fact that healthcare is one of the few consumer-focused industries where being a few minutes late is a sin so grave that it's punished with a total cancellation of the appointment, and sometimes even the forfeiture of the fee.

"Can I come tomorrow?" I said.

I called. He wasn't there so I had to leave a message. He called me back during my yoga class.

As frustrated as I get, I am lucky that (at least for now) I don't have kids, which must be a medical-administrative hell I can't even fathom.

I have vivid memories of my frazzled mom rushing to ferry my brother and me to orthodontists' offices and spending her free time filling out insurance reimbursement forms for obscure kids' medications. To this day, a common fight between my boyfriend and I ends with me wailing that he's not "being the sort of guy who would deal with the pediatrician appointments." Cheat on me? Fine. Require me to remember to fax the kids' immunization records on my lunch break? It's over.

One problem with American healthcare is that it attempts to staple a simple documentation system favored by doctors, who prefer to focus on patient care, onto an increasingly convoluted payment system favored by insurers. Nothing compares with the agony of losing the paper itemized receipt from an out-of-network doctor that you were planning to file for reimbursement using your insurance website. (Also, be sure you have a scanner at hand! Remember scanners? You bought yours in 1998.)

Usually this vintage record-keeping method is just an inconvenience, but sometimes it can cause some major health and financial trouble. Some people have jobs that discourage using the phone to make personal appointments during the day, so it can be hard to schedule or reschedule in time. And having health records scattered throughout multiple doctors' offices can lead to dangerous drug interactions, especially if you can't check in with those doctors electronically.

I am a senior physician with over six decades of experience who has observed his share of critical illness—but only from the doctor's perspective. That changed suddenly and disastrously on the morning of June 27, 2013, ten days after my ninetieth birthday, when I fell down the stairs in my home, broke my neck, and very nearly died. Since then, I have made an astonishing recovery, in the course of which I learned how it feels to be a helpless patient close to death. I also learned some things about the US medical care system that I had never fully appreciated, even though this is a subject that I have studied and written about for many years.

As background, I should first explain that this was not my first experience as a patient. Over the years I had acquired a multitude of ailments common to the elderly, most of which were minor. However, I have a few more serious health problems, including long-standing atrial fibrillation (an irregularity of my heart rhythm) that requires the daily administration of warfarin, an anticoagulant drug, to prevent the formation of blood clots inside my heart. More recently, I developed aortic stenosis, a slowly progressive narrowing of the heart valve that controls the outflow of blood into the aorta. So far, it has not caused any cardiovascular symptoms, but it could do so at any time.

And some four years ago, I developed a mysterious and very painful disorder of the muscles and joints, called polymyalgia rheumatica, relieved only by the daily administration of prednisone. This disorder, combined with an unsteady gait (caused by a viral infection of my inner ears many years ago), made it necessary to walk with a cane, and difficult to climb the stairs in my multilevel condo. For this reason, a stair lift had been installed to help me navigate the first and steepest flight of stairs from our entrance hallway to the first floor.