Heroin in Cincinnati: This is what an epidemic looks like - Cincinnati.com

It's a little after sunrise on the first day of another week, and Cincinnati is waking up again with a heroin problem. So is Covington. And Middletown. And Norwood. And Hamilton. And West Chester Township. And countless other cities and towns across Ohio and Kentucky.This particular week, July 10 through 16, will turn out to be unexceptional by the dreary standards of what has become the region's greatest health crisis. 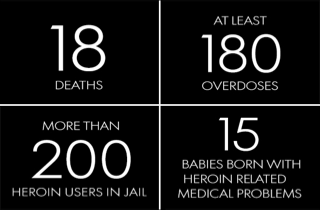 This is normal now, a week like any other. But a terrible week is no less terrible because it is typical. When heroin and synthetic opiates kill one American every 16 minutes, there is little comfort in the routine.There is only the struggle to endure and survive.MONDAY"I just walked in and my buddy, he hasn't been answering his phone. I believe he's OD'd and I think he's dead."
7:25 A.M.Jimmy Doherty arrives at the halfway house on Ravine Street still wearing the blue slippers he got in jail.He came straight here after his release this morning because he thinks the program at the Pax House in Cincinnati will help him get his addiction under control."We'll get you going," says the house manager.Doherty crushes his cigarette and sits down to fill out a form for new residents, but he's stumped by a question about his history with drugs. It's a long history."Describe all mood-altering substances?" Doherty asks.The manager shakes his head. "Drug of choice," he says. "Just put your drug of choice."Doherty nods. He turns back to the page and writes a single word.Heroin.9 A.M.On some days, even before she calls their names, Judge Gwen Bender can tell why the defendants are in Courtroom A.Their bones look as if they might poke through their skin. Their eyes are sunken, their hair a tangled mess. Some are unsteady on their feet. Others scratch at sores on their arms.A few lean on the table in front of the judge as if it is the only thing holding them up."This is a heroin case?" the judge asks.This morning, as on most mornings, one in four felony cases on this Hamilton County court docket is directly connected to heroin.There's a 70-year-old Army veteran who stashed a bag of syringes in a basement crawl space. A Taylor Mill woman who tried to hide needles in her vagina after shooting up. A St. Bernard woman who overdosed when a friend injected her with heroin.The woman from St. Bernard looks confused, as if she's unsure how she got here. She was on the floor of her friend's house, barely breathing, less than 12 hours ago.Now she's standing before the judge, eyes sunken.
More ...https://www.cincinnati.com/pages/interactives/seven-days-of-heroin-epidemic-cincinnati/
Posted by Gary at 9:58 PM

The Cost of the Opioid Crisis | The New Yorker

In September, 2016, Donald Trump delivered a speech at the Economic Club of New York. "Today, I'm going to outline a plan for American economic revival," he said. "It is a bold, ambitious, forward-looking plan to massively increase jobs, wages, incomes, and opportunities for the people of our country." He went on to talk about lowering taxes and removing regulations, renegotiating trade deals and building a border wall. But he overlooked one of the most pressing issues facing the American economy today: the opioid crisis.

Politicians tend to talk about the crisis in moral terms, focussing on the ways in which opioid addiction has ravaged families and communities. The New Jersey governor, Chris Christie, whom Trump appointed to lead a commission to study the issue, has compared opioid-overdose fatalities to terrorist attacks, saying, "We have a 9/11-scale loss every three weeks." Opioids, which include prescription painkillers and drugs like heroin and fentanyl, are indeed responsible for large-scale human suffering. According to the National Survey of Drug Use and Health, 97.5 million Americans used, or misused, prescription pain pills in 2015. Drug-overdose deaths have tripled since 2000, and opioid abuse now kills more than a hundred Americans a day. But often omitted from the conversation about the epidemic is the fact that it is also inflicting harm on the American economy, and on a scale not seen in any previous drug crisis.

In July, when economists at Goldman Sachs analyzed how the 2008 financial crisis and its aftermath may have contributed to levels of opioid addiction, they noted that fewer prime working-age men are participating in the labor force than in the past, and that many of these men have been found to be taking prescription pain medication. Research by the Princeton economist Alan Krueger, published last week, indicates a definitive link between the two.

Other studies have tried to put an exact figure on the cost of the epidemic. A study published in the journal Pain Medicine in 2011 estimated that health-care costs related to prescription opioid abuse amounted to twenty-five billion dollars, and criminal-justice-system costs to $5.1 billion. But the largest cost was to the workplace, which accounted for $25.6 billion, in the form of lost earnings and employment. "There are major consequences to the economy, not just to the employer and employee who are losing productivity but also to civil society," Howard Birnbaum, a health-care economist with the Analysis Group and one of the authors of the study, told me recently. "If people don't have jobs, they don't have money to spend in the grocery store, on gasoline. It's the old multiplier effect: the socioeconomic burden is much broader than on any individual or any firm." The study estimated a total cost to the economy of $55.7 billion, but, Birnbaum said, "I suspect it is even larger now."Another study, just two years later, reached a total of $78.5 billion.

When I spoke with Anupam Jena, a health economist and physician at Harvard Medical School, he argued that such figures don't include the most dramatic cost: the economic value of the loss of life. Taking a conservative estimate of twenty to thirty thousand opioid-related deaths a year and multiplying those numbers by five million dollars—a figure commonly used by insurance companies to value a human life—Jena estimated that loss of life alone costs the economy an additional sum of between a hundred and a hundred and fifty billion dollars a year. All these figures suggest that addiction prevention and treatment should be a part of any serious policy discussion about how to strengthen the U.S. economy.

‘The Pills Are Everywhere’: How the Opioid Crisis Claims Its Youngest Victims - The New York Times

When Penny Mae Cormani died in Utah, her family sang Mormon hymns — "Be Still My Soul" — and lowered her small coffin into the earth. The latest victim of a drug epidemic that is now taking 60,000 lives a year, Penny was just 1.

Increasingly, parents and the police are encountering toddlers and young children unconscious or dead after consuming an adult's opioids.

At the children's hospital in Dayton, Ohio, accidental ingestions have more than doubled, to some 200 intoxications a year, with tiny bodies found laced by drugs like fentanyl. In Milwaukee, eight children have died of opioid poisoning since late 2015, all from legal substances like methadone and oxycodone. In Salt Lake City, one emergency doctor recently revived four overdosing toddlers in a night, a phenomenon she called both new and alarming.

"It's a cancer," said Mauria Leydsman, Penny's grandmother, of the nation's opioid problem, "with tendrils that are going everywhere."

While these deaths represent a small fraction of the epidemic's toll, they are an indication of how deeply the American addiction crisis has cut.